ZIPS Car Wash (zipscarwash.com) announced the 12 student-athletes to be featured in the inaugural Car Wash Convos series – ZIPS’ creative approach to name, image, and likeness (NIL) allowing college sports fans to “ride along” for a personality-driven video taking place during the car wash. Male and female student-athletes from the University of Arkansas®, University of Tennessee®, and University of North Carolina® will give fans a glimpse into their lives off the field, as they are interviewed by a high-profile personality with strong ties to the university. 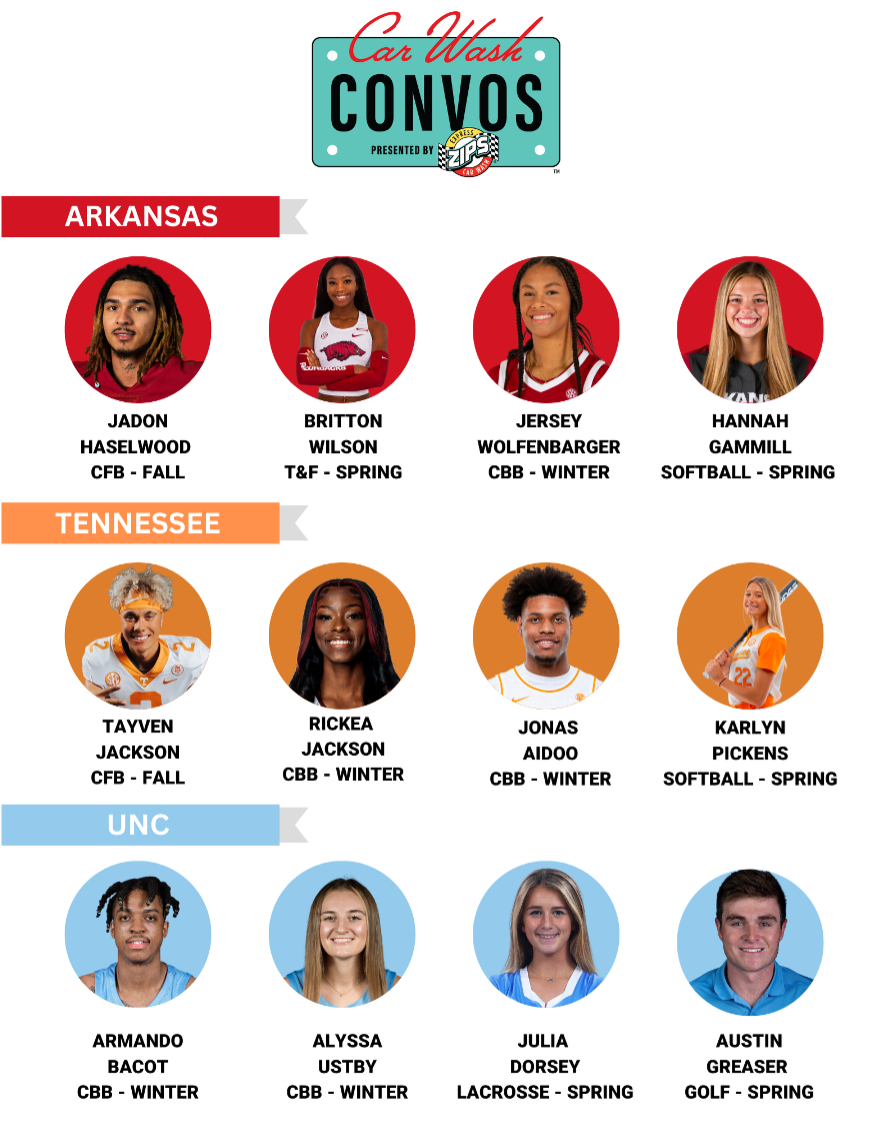 The first of 12 videos to be revealed is live now and features Jadon Haselwood, University of Arkansas® Razorbacks’ wide receiver. Car Wash Convos will highlight five male and seven female student-athletes proudly wearing their official university gear. The 12 student-athletes, representing football, basketball, and Olympic sports, were sourced by NIL marketplace leader Opendorse on behalf of ZIPS and LEARFIELD, the schools’ athletics multimedia rights holder which has a national relationship with ZIPS. Car Wash Convos is launching now and will roll out over the course of the athletic year.

“Car Wash Convos is a great opportunity for Razorback fans to get to know more about my personality off the field, and I’m excited to be included in this partnership alongside such other accomplished athletes,” said Haselwood.

“Launching Car Wash Convos and our overall approach to NIL with official school IP, which includes 24 additional episodes to air over the next two years, ties back to our three-year commitment to our sponsorship of these universities, college sports and the loyal fans who follow the lives of these student-athletes,” said Mark Youngworth, Chief Marketing Officer, ZIPS Car Wash. “We feel that introducing fans to the lives of these student-athletes is the optimum approach for overall strength and effectiveness of our campaign, and we’re thrilled to highlight seven female athletes in a year celebrating the 50th anniversary of Title IX,” he said.

As part of its multi-year, multi-school relationship with LEARFIELD, which was announced in August, ZIPS is now the proud sponsor of six universities – Arkansas, Baylor, Georgia, North Carolina, South Carolina, and Tennessee. The multi-faceted agreement with LEARFIELD enables ZIPS to use official university marks and logos in marketing campaigns and in NIL activation through LEARFIELD Allied, the company’s cooperative IP for NIL. The company’s LEARFIELD Studios team is managing the Car Wash Convos’ content with ZIPS.

“We are proud and excited about our partnership with ZIPS. They have aggressively entered the college space with innovative fan-focused programs highlighted by Car Wash Convos directed and produced by LEARFIELD Studios. The Convos speak to the ZIPS consumer in a fun and distinct way, connecting them to their favorite schools and student-athletes,” said John Brody, chief revenue officer, LEARFIELD. “It is exciting to see a partner brand authentically utilize university IP with the NIL of these 12 student-athletes. This is NIL done right.”